10 Lessons About Relationships From A Little Mouse 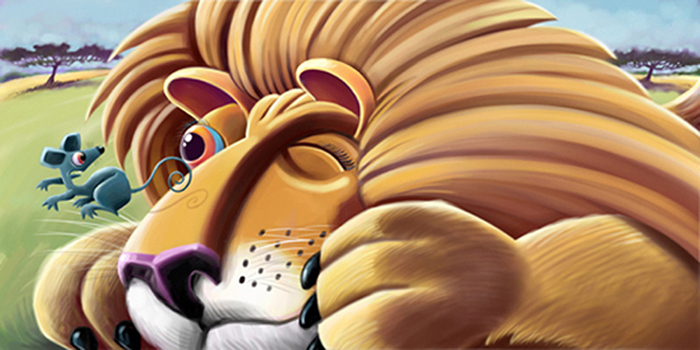 Some of my clients have asked why I have this illustration above my bookcase in my office. When they ask, I explain that my husband, Ed, drew this a few years ago. When I sit across from it, I’m reminded of him and our connection as we go about our respective callings during the day. Ed is primarily an illustrator for children’s materials and I am a relationship counselor.

Aside from the “sentimental value” of the piece I usually explain something about the relational themes in this story of The Lion And The Mouse befitting a counselor’s office. I asked Ed if I could have it when I was “setting up shop” years ago and am so glad that I have it.

Every now and then I take the opportunity to use this Aesop’s fable in my work.

Remember the story? Here is a summary of the tale that I grabbed off the web in case you forgot the classic fable from your childhood: http://www.read.gov/aesop/007.html.

The Lion And The Mouse

A Lion lay asleep in the forest, his great head resting on his paws. A timid little Mouse came upon him unexpectedly, and in her fright and haste to get away, ran across the Lion’s nose. Roused from his nap, the Lion laid his huge paw angrily on the tiny creature to kill her.

“Spare me!” begged the poor Mouse. “Please let me go and some day I will surely repay you.”

The Lion was much amused to think that a Mouse could ever help him. But he was generous and finally let the Mouse go.

Some days later, while stalking his prey in the forest, the Lion was caught in the toils of a hunter’s net. Unable to free himself, he filled the forest with his angry roaring. The Mouse knew the voice and quickly found the Lion struggling in the net. Running to one of the great ropes that bound him, she gnawed it until it parted, and soon the Lion was free.

“You laughed when I said I would repay you,” said the Mouse. “Now you see that even a Mouse can help a Lion.”

A kindness is never wasted.

Stories like this have been passed down more by oral tradition rather than in writing. Consider the similarities and differences from this version from http://www.aesopfables.com/cgi/aesop1.cgi?sel&TheLionandtheMouse2:

The Lion and the Mouse

Once when a Lion was asleep a little Mouse began running up and down upon him; this soon wakened the Lion, who placed his huge paw upon him, and opened his big jaws to swallow him.

“Pardon, O King,” cried the little Mouse: “forgive me this time, I shall never forget it: who knows but what I may be able to do you a turn some of these days?”

The Lion was so tickled at the idea of the Mouse being able to help him, that he lifted up his paw and let him go.

Some time after the Lion was caught in a trap, and the

hunters who desired to carry him alive to the King, tied him to a tree while they went in search of a waggon to carry him on.

Just then the little Mouse happened to pass by, and seeing the sad plight in which the Lion was, went up to him and soon gnawed away the ropes that bound the King of the Beasts.

“Was I not right?”, said the little Mouse.

Both versions of the fable illustrate how every person, no matter how small, can make a significant contribution in the lives of others. These stories often end with a moral axiom like those you can see from the two examples above though the emphases are slightly different.

For young children who often feel very small in a big kid or adult world, this story is powerful indeed. It tells them they are significant and their actions of kindness matter. Even seemingly small acts of kindness and bravery are important.

Adults, too, can learn a lot from ol’ Aesop and his mouse friend.

I often wonder if what we normally consider to be children’s tales were actually written for adults. Maybe we will accept their wisdom more when we let them speak to us too when we read them to our children and grandchildren.

Stories come and go. The ones that teach us something important stand the test of time.

Truth be told, scholars are not even sure there was an Aesop. Stories attributed to Aesop are so old, we are not even sure they came from one person. Wikipedia says that our best guess is that he was a fabulist (story teller) who lived c. 620 – 564 BCE, at least that is what Aristotle wrote about Aesop.

Most accounts say he was most likely an African slave, perhaps from Ethiopia. Apparently there are about as many stories about this character as there are fables attributed to Aesop. At least that is what I picked up in this article in Wikipedia: https://en.wikipedia.org/wiki/Aesop.

So, how do I use this illustration as a relationship therapist?

Of course, no good counselor would leave you without a challenge or two. Do you think you are more like the lion or the mouse? What do you need to learn most from the story today?